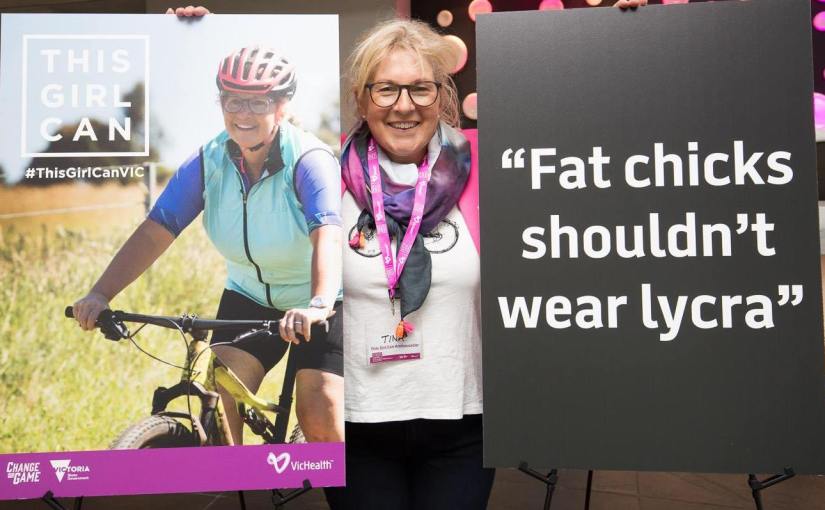 ‘Hey Tina, thought of you when I saw this. You should apply’…and so went the 20 or so messages and emails from well meaning friends.  But could I live up to the role of sharing my story for the  This Girl Can – Vic? Nope, not gonna do that one!

Like so many I’d watched the UK This Girl Can campaign and was so overwhelmed by the power of the ads that there was no way I could be ‘one of them’. And besides, I had to make a video to submit as an application – I just knew there would be some super professional submissions. And what would I say…probably not much that anyone would care about.

I don’t know what happened. Maybe I was in a bad mood, maybe I felt crapped off at feeling overweight or maybe somebody said something to me that day that triggered something…yes, that was it. I walked in the door after a ride, put the bike against the wall, still had my jersey on and I set the phone up on the top of a bucket to film. Yes, technical department was in full force!

As I look back, I have to laugh…very loudly! When I decided to film something for the This Girl Can – Vic campaign I think I did 2 takes. I’ve kept the first one and it is hilarious. I sit there, silent, roll my eyes, look around the room…nope, nothing to say! I’m not often stuck for words, but I was struggling. What on earth would they think interesting?

As I pulled my jersey down, adjusted it pretending it was a good fit, trying to cover my ‘curves of indulgence’ for the camera, suddenly something came over me. I remembered the time some jerk almost killed my love of cycling…‘fat chicks shouldn’t wear lycra’ he told his mate. They sniggered as we rode off.

I was reminded of that story as I adjusted my top for the video and things just flowed…that comment was one of the most humiliating moments ever for me. I’m long past it now, but the fact is, the comment has stuck: I can tell you exactly where it was, what I was wearing and who I was with. I remember where I rode to that day and I remember the comment that made me angry as hell.

Being told that ‘fat chicks shouldn’t wear lycra’ was an insult. That jerk felt so entitled to let my size dictate what he thought I should, or shouldn’t wear. Well buddy, let me tell you…it’s none of your business! My body is mine, my choice of clothes is mine and my choice of activity is MINE! Before you pass judgement, tell me without hesitation or doubt that you are perfect…yeah, thought so. You can’t.

I was told I shouldn’t, so I did it anyway – damn him, he would not stop me. That comment only gave me more resolve to keep riding. The feelings I get when I ride, the emotional energy that rises to a rush of euphoria and the self satisfaction of the ‘Woohoo…I did that‘ moments are far more powerful than any single negative comment from a self entitled twit. I choose to ride my bike, I choose to wear what I wish and I am thankful I am able to tell my story to others. I hope in some small way it empowers other women to rise above the judgement that is served to us daily and they too will just ‘do it anyway’.

Call them ‘curves of indulgence’, middle age spread, genetics at play, spare tyres…whatever! As one of my fellow Ambassadors Deb said, ‘I didn’t sit down and eat cake to get like this’…no, it’s just the way we are in all different shapes, sizes, builds and weight. Embrace it, accept it, move it, shake it, jiggle it and love it…your body is your home.

Since being chosen as an ambassador for the This Girl Can – Vic campaign it’s been a whirlwind of experiences that cement in my mind that our individual stories resonate with others who have collectively felt our pain, our fear and our judgement. By telling the stories the purpose is to help others overcome the doubt and apprehension and take that first step to becoming active. I am so honoured to have been included among such an inspiring group of realistic and authentic role models, each with their own powerful stories.

Saturday morning in the humidity, mountain bikes on hand, filming starts. Along with fellow Wheel Women riders Emily and Lyn it was really an experience as none of us really ride mountain bikes…looking natural on these unwieldy beasts was enough to have us laughing (and almost crying) all day.  We were sprayed with water to look sweaty, rode up and down a tiny mound that towards the end of filming became a mountain and we ended the day exhausted. It was kind of weird being asked again and again by various crew what our stories were, but it reinforces that no matter how many times YOU tell YOUR story, women can be inspired. The crew admitted they were moved by all the stories they heard from each woman they had filmed.

This Girl Can  – Vic is now in full swing. I have seen women walking with their children, riding with their partners, running with friends and just being outdoors and active. I hope that the campaign has gone some way to inspiring some of the women I have seen in the last few days get out there and take control of their mind, body and soul. There is certainly enough evidence out there now that tells us that when we include some form of fun physical activity in our lives, it’s not just great for physical health, but mental health as well. That’s gotta be good for everyone.

I couldn’t help but smile at every single one of those women as I rode by, knowing that collectively, we have the power to make our own changes, no matter how small. Taking that first step is the hardest…go on, you CAN do it.

If you’d like to watch my submission video you can see it here: This Girl Can…ride bikes!

Be sure to jump onto the This Girl Can – Vic website to see how you can take those first steps and get involved.

I am a This Girl Can – Victoria Ambassador – but the views expressed here are my views only and not those of VicHealth.